Gift of Gallery Paule Anglim, The title page of the codex features an upside-down portrait of Christopher Columbus being devoured whole by a fanged cannibal. Chagoya seeks retribution for the deeds of the explorer. 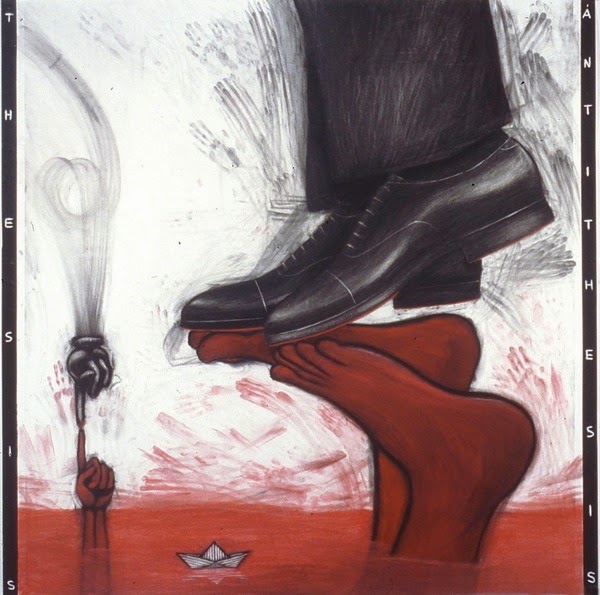 What can I learn about how this reproduction is different from the original artwork? The digitized image is a detail of a much larger artwork. It is the sixth of seven panels.

The colors in this reproduction are somewhat warmer than the original artwork. The other panels include Aztec and Mayan imagery, old European graphic imagery, popular cartoon imagery, as well as sketches by the artist.

The original codex accordion folded manuscript is a monoprint on heavy paper which is rough and does not lie perfectly flat. The top and bottom edges of the codex are uneven.

What can I determine about the condition of the artwork? The codex is in excellent condition.

What can I determine about what the artwork depicts, if anything? The sixth panel of the codex depicts three female figures. On the left is a photographic image of an Aztec stone sculpture depicting the goddess Cihuateto.

The sculpture represents a woman with a skull head squatting on her knees with her fisted hands raised to shoulder level. She wears a skirt tied at the waist. A halo appears above the head of the goddess. On the right is a traditional image of the Virgin of Guadalupe, flanked at her feet by two nuns each holding candles.

The Virgin and the nuns all bow their heads. The Virgin stands with her hands in a position of prayer, blocking the rays of the sun, which form an oval surrounding her.

She wears a cloak decorated with stars and stands on a crescent moon. At her feet a small winged figure holds her cloak in one hand and the hem of her gown in the other. A cartoon speech bubble emerges from the nun on the left. She is saying "Beat you.

What can I learn about how the artwork was made? Enrique Chagoya has said that he "sketches" by collecting photocopies of diverse images, which he then recombines intuitively.

The amate paper on which the images appear is made by pounding wet bark until it stretches and flattens into a sheet the thickness of light cardboard.The Whitney Museum of American Art.

In his Artist’s Statement, he writes that his art is “a product of collisions between historical visions, ancient and modern, marginal and dominant paradigms—a thesis and antithesis—in mind of the viewer.

The Whitney Museum of American Art.

Explore works, exhibitions, and events online. Located in New York City. A large drawing from titled Thesis/Antithesis reveals how deeply embedded such dialectical formulations are in Chagoya's practice. Typical of the earliest works included in the show in medium and style, this oversize drawing is rendered in black charcoal and .